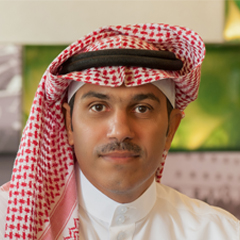 Since joining the Department of Geosciences in September 2006, Dr. Khalid has successfully led many interdisciplinary collaborative projects funded by KFUPM, KACST, and Saudi Aramco. These projects have allowed us to network with colleagues from prestigious international universities (Stanford, Tennessee, Leeds, Cardiff, Copenhagen, Milan) and from oil companies.

Dr. Khalid initiated and led the American Association of Petroleum Geologists (AAPG) Student Chapter at Geosciences Department. Dr. Khalid was able to secure an exclusive sponsor to significantly fund extracurricular activities. This generous fund has enabled our students to conduct a wide range of activities, including international field excursions to Turkey, Denmark, and Spain between 2011 and 2017. Also, as a faculty advisor of the KFUPM/AAPG student chapter, Dr. Khalid successfully supervised a team of BS and MS students that won the Imperial Barrel Award in the Middle East in 2010, 2012 and 2015. In 2010 and 2015, the KFUPM team won the third prize in the global contest in New Orleans and Denver, respectively.

In addition, below are some selected awards received: