Liquid-liquid interfacial phenomena are central in a wide variety of scientific disciplines and encompass down-to-earth aspects such as mayonnaise production, more complex processes in cellular biology and determine what drives the flow in an oil reservoir. It is the actual molecular structure at the boundary between two immiscible liquids that determines the interfacial properties. The experimental determination of such a structure has previously been unsuccessful. CPG researchers and visiting students from University of Copenhagen have designed an experiment to enable crystallization of the interface between brine and a surfactant containing organic phase. A single-crystal structure reveals, for the first time, how the structure and orientation of surfactants impact macroscopic measures such as interfacial tension.

Seeing is believing; in almost all scientific disciplines that involve chemistry, there is a desire to go beyond the physical limits that prevent the observation of real-time and real-space motion of molecules. In, for example, ultrafast sciences where Dr. Ahmed Zewail was a pioneer in producing snapshots of chemical reactions while they occur. Observing dynamic molecular-level structure or even only molecular structure for that matter, in liquids is a challenge. The challenge becomes even larger when it comes to the structural properties of interfaces, that is, right at the boundary between two immiscible liquids. The chemical bonding environment and associated chemical structure at interfaces are central factors in determining macroscopically observable parameters such as the interfacial tension. So far, no determination of the structure of the interfacial layer with Angstrom scale resolution has been reported. However, experiments are taken to indicate that the oil-water interface has a specific structure and our approach here is to use the potential ordering at a brine/oil-surfactant interface; at CPG we have studied interfacial behavior in a series of measurements where the interfacial tension (IFT) between a decane/surfactant phase and an aqueous phase was measured in a so-called pendant droplet experiment that involves the submersion of a decane droplet containing surfactants into an aqueous solution. The surfactant was chosen as an aliphatic carboxylic acid to mimic the natural surfactants in most crude oils: It is of utmost importance for efficient oil production to understand the underlying mechanisms that influence interfacial tension and thus oil production – the major factor in determining the flow that is necessary to extract oil from the ground. In order to span a range of interfacial properties, the nature of the acid is systematically varied by sequentially adding CH2 groups as shown in Figure 1.

Figure 1. The surfactants have structures with n ranging from 0 to 4.

To shed light on how the surfactant structure influences the structure at the interface we brought forward our secret weapon – the Zn2+ ion to try to get a hold of the interfacial structure. Already at intermediate concentrations, the distinctive nature of Zn2+ reveals itself by giving rise to a very low IFT, which is indicating a significant interaction between the electrolyte and the liquid-liquid boundary.

Extending the measurement times in the pendent drop experiments beyond 90 seconds result in a remarkable finding: We observe crystallization of the interface in real-time, that is, we are able to record an actual movie of the crystal growth with the camera that is being used to observe the drop shape of the decane droplet that is submerged in the brine. Figure 2 depicts a series of still images.

Figure 2. Crystallization of the decane/acid-brine interface. The acid in the depicted case has n = 2 and the concentration of Zn2+ is 0.5 M. .

It is only when the linker between the ring and that acid group attains a certain length that the crystallization takes place. It is found that the crystals form for n = 2-4 whereas n = 0 and 1 clearly do not result in crystallization even after extended exposure times. The results are pointing towards a drastically impacted interfacial structure with an onset at n = 2 that either reveals itself in the measurement of the surface stress (IFT) or by providing a structure that is favorable for Zn2+ adhesion and subsequent crystallization.

In order to determine what impacts the surfactant alignment to enable crystallization one would have to deduce the structure at the interface and in the present study, we have done exactly that using X-ray diffraction in collaboration with researchers at University of Copenhagen.
Zn2+ ions are found to be hexa-coordinated with the acid oxygens contributing differently to the binding environment. 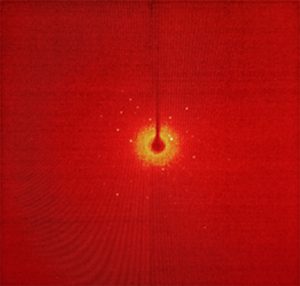 The structure shows that there is a requirement for a rather flat and flexible orientation of the organic acids at the interface to match the most favorable coordination angles for Zn. This is exactly what can be achieved in the case of the larger acids because the larger fatty chains allows for more favorable stacking and hydrophobic interaction with the decane phase while at the same time enabling a hydrophilic interaction via the COOH group to provide the best compromise and thereby enabling a capture of the Zn2+ ions because of this favorable structure.
This idea is illustrated with the schematic in Figure 4 showing that structural parameters, such as packing at the surface, are important. The surfactant has to be directed very specifically for the small acid compared to what is the case for the longer system: that leaves some flexibility to the orientation of the surfactant at the interface. 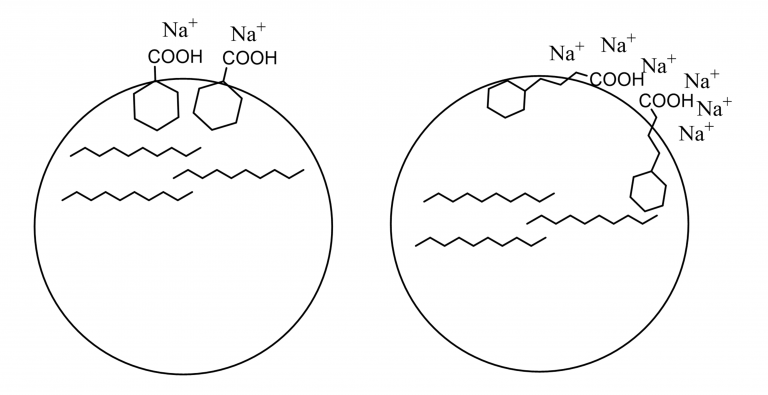 Figure 4. Schematic drawing to illustrate the interpretation of the interplay between structure and electrolyte concentration. When the larger acid leaves more room for interaction with the electrolytes at the surface the IFT goes down as the concentration goes up.

A molecular dynamics study has been found to be in agreement with all the experimental findings and has tied the final knot by providing an answer to why the crystal does not immediately dissolve in the surrounding water. The computational details are provided in the supporting information.
Figure 5 shows a model of the crystal interface for n = 0 and n = 4 clearly gives the reason for the lack of solubility of the Zn crystal once it is formed. It can be seen that water molecules simply cannot penetrate the crystal due to hydrophobic interactions in the case of n = 4 whereas this is less of a problem the case of n = 0 where the penetration subsequently leads to dissolution. 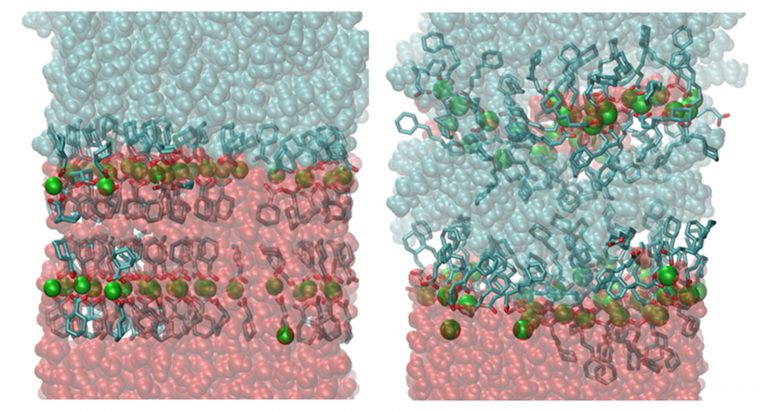 Figure 5. Molecular dynamics simulation of a Zn crystal with the n =0 acid (left) and the n =4 acid (right) at the decane water interface after 300 ns. The initial state was a uniformly distributed lattice in both cases. Water is at the bottom and it can be seen that the water breaks through in the case of the small acid and results in dissolution.[TS1] [U2]

The combined body of data with the first atomically resolved interface structure clearly shows that a wealth of parameters need to come together to enable the crystallization of an interface.
However, by balancing the hydrophobic and hydrophilic interactions it is indeed possible to solidify interfaces with all the possible applications and side-effects it will have. In the present case we were able to design the system such that the IFT was impacted the most only playing with a range of very simple and naturally occurring surfactants. The CPG researchers who work on synthetic surfactants are currently developing the appropriate design strategies even further. In the context of increasing the performance of an oil reservoir lowering the IFT of oil against brine will act very favorable towards increased production and controlled crystallization involving naturally occurring surfactants (acids) will provide the means of making oil flow in a predetermined direction to avoid sections with large water content. These are all key research topics in the Oil Field Chemistry (OFC) labs at CPG and breakthroughs within the topics of enhanced recovery and productivity enhancement will result in value for the Kingdom of Saudi Arabia.