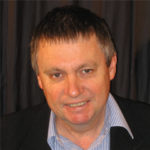 Dr. Greenhalgh is Saudi Aramco Chair Professor of Geophysics in the College of Petroleum Engineering and Geosciences (CPG) at KFUPM. Prior to joining CPG in August 2016, he was Professor of Geophysics at ETH Zürich, Switzerland for 10 years. He is also Emeritus Professor of Physics at the University of Adelaide, Australia. Dr. Greenhalgh has published over 240 journal articles in many areas of experimental and theoretical geophysics, including seismic wave propagation, laboratory and numerical seismic modelling, geotomography, full-waveform inversion, earthquake seismology, and electrical/electromagnetic modelling/imaging. He was elected a Fellow of the Australian Academy of Technological Sciences and Engineering and the UK Institute of Physics. He is an Editor of Pure and Applied Geophysics and the Journal of Geophysics and Engineering.

“There is a need for a radically new laboratory experimental approach for studying the interaction of seismic waves with the complex media of the Earth’s subsurface. I present here a fundamental new approach to seismic wave experimentation that involves fully immersing a physical seismic experiment within a virtual numerical environment. This enormously challenging endeavor, which I was undertaking with colleagues at ETH Zurich and the Scientific Research/Big Physics team at National Instruments, Austin, Texas, is relevant to many outstanding issues in seismology; it has not been previously attempted. A broad range of long-standing problems in wave propagation and imaging that have eluded Earth scientists and physicists for decades will be addressed. Synthetically produced complex models will be used in wavefield-focusing experiments and to achieve complete time reversal in 3D for the first time ever. Finally, the laboratory is highly relevant to applications outside geophysics such as non-destructive testing, medical imaging and lithotripsy.”

CIPR Colloquium is a weekly event of the Center for Integrative Petroleum Research of the College of Petroleum Engineering & Geosciences at KFUPM. It provides KFUPM, Saudi Aramco, and DTV researchers and scientists with the opportunity to get together and discuss upstream technical matters in a collegial relaxed setting. Students are encouraged to attend and engage.