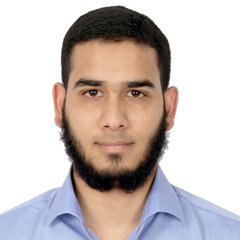 Umair bin Waheed was born in Karachi, Pakistan where he received his early education. After completing an undergraduate degree in electronic engineering, he received the prestigious Erasmus Mundus scholarship to pursue double degree Masters at Politecnico di Torino, Italy and Université Catholique de Louvain, Belgium. Inspired by the vision of KAUST to create a modern house of wisdom, Umair then joined the university to pursue Ph.D. under the able supervision of Tariq Alkhalifah. After completing Ph.D. in 2015, he joined the Department of Geosciences at Princeton University as a postdoc. Since finishing his postdoc in 2017, Umair has been at the College of Petroleum Engineering and Geosciences, KFUPM as Assistant Professor.

In addition to conducting scientific research, Umair has always been curious about communicating scientific findings. During his time as a postdoc at Princeton, he worked with the Princeton Writing Program (PWP) as a Writing in Science and Engineering Fellow under the mentorship of Judy Swan. He received intensive training in teaching writing at the PWP. Later he taught courses on scientific writing to graduate students from across disciplines at Princeton. Encouraged by the positive feedback from his students, Umair now conducts workshops helping students across different universities to effectively communicate their scientific discoveries through writing.