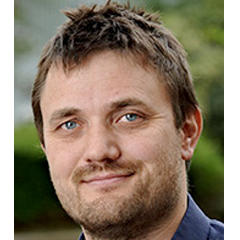 Michael Pittelkow was born in 1977 in Copenhagen. At the University of Copenhagen he received his PhD degree in 2007. During his studies he spent extended periods in Australia (CSIRO in Melbourne), The Netherlands (The Technical University of Eindhoven) and England (Cambridge University). He undertook postdoctoral studies in the UK (Cambridge University) before moving back to Denmark to start as an adjunkt (assistant professor) at the department of chemistry, University of Copenhagen in November 2008. In 2012 he became a permanent adjunkt and in 2013 he became associate professor (lektor) at the same department. His research interests include organic synthesis, physical organic chemistry, dendrimers and supramolecular chemistry.