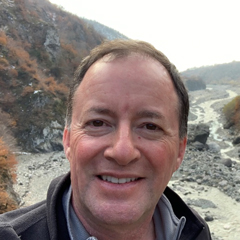 Dr. John D. Humphrey is Associate Professor and Chairman of the Department of Geosciences at King Fahd University of Petroleum and Minerals. His appointment is in the College of Petroleum Engineering and Geosciences (CPG). He has a B.S. in Geology from the University of Vermont, and his M.Sc. and Ph.D. degrees from Brown University in Geological Sciences. He served on the faculty of Geosciences at the University of Texas at Dallas from 1986 to 1991. Beginning in 1991, Dr. Humphrey was an Associate Professor of Geology and Geological Engineering at Colorado School of Mines. He served as Department Head from 2006 to 2013. He joined CPG-KFUPM in early 2017. He teaches courses in physical geology, field geology, carbonate sedimentology, and carbonate diagenesis. His areas of specialization include carbonate diagenesis and geochemistry, carbonate sedimentology and stratigraphy, carbonate reservoir characterization, unconventional carbonate reservoirs, stable isotope geochemistry, and paleoclimatology. His current research focuses on all aspects of carbonate mudrocks in unconventional petroleum systems, including Mesozoic source rocks of Saudi Arabia.