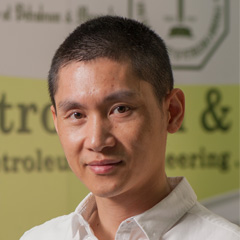 Dr. Li has been assuming the role of a research engineer III since May 2014 at the Center for Integrated Petroleum Research (CIPR). Before that, he had served as a research scientist III from Dec. 2012 to Dec. 2013 at Numerical Porous Media Center, KAUST, KSA. He had independently proposed the DSBGK method to efficiently and accurately solve the BGK equation and developed the MPI Fortran software NanoGasSim using the DSBGK method for the study of shale gas permeability and gas flows in MEMS at high Knudsen (Kn) number.