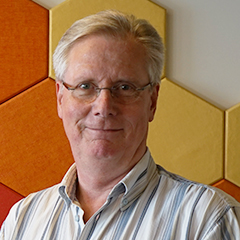 He moved to Germany in 1992, to the GEOMAR Marine Research Institute in Kiel (Northern Germany near Denmark) where his research focused on present-day carbonate systems in the Gulf of Aqaba and the Gulf of Panamá to Carboniferous (Spain), Jurassic (Morocco) and Miocene (Egypt) carbonate platform systems. After several years at GEOMAR, he accepted a Full Professorship in Carbonate Sedimentology in Marseille in 2005 at the Université de Provence, where he worked with Cretaceous calcidebrites and calciturbidites as well as cool-water carbonates. He moved back to the Netherlands in 2007 to accept a Full Professorship in Carbonate Sedimentology and Marine Geology in his hometown of Amsterdam with the Vrije Universiteit Amsterdam. He also occupied a part-time professorship at Delft University of Technology for six years. In 2014 he visited the TOTAL Research Laboratory in Pau (France) for an 8-month sabbatical. Between late 2016  to December 31, 2020, John transferred to the College of Petroleum Engineering and Geosciences (CPG) of the King Fahd University of Petroleum and Minerals (KFUPM) in Dhahran (Kingdom of Saudi Arabia) to accept the Saudi Aramco Chair in Geosciences. In January 2021 John transferred to Adjunct Professor with CPG-KFUPM in Dhahran (KSA). He also remains associated with the Vrije Universiteit Amsterdam (The Netherlands).